The Sunset Grand Prix was Really Rubbish Racing's sixth Special Event, and the first to cover a 100% race distance (akin to real-life Formula One races). The race was held at the Yas Marina Circuit, the track used for the Abu Dhabi Grand Prix. The unique feature of the race was that the race started under normal light conditions and then the light started to fade and the race ended under floodlights. It was also be the first time an officially sanctioned RRR event lasted well over an hour.

The event took place on 22nd January 2012 during the RRR F1 off-season as a warm up to F1 Season 2. Smifaye won the race after an hour and a half of racing.

The grid was decided by a 15 minute qualifying session. Normal F1 rules apply so the top 10 qualifiers started on the same tyres they set their fastest lap on.

The race was at 100% race distance meaning it lasted well over an hour.

All other assists are allowed. This decision has been made as it has worked incredibly well in F1 Season 1. 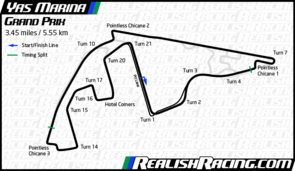 The 16 drivers who entered are as follows:

Butler258 set his usual provisional pole early on in the session but was soon usurped by Shouty who held onto provisional pole until 5 minutes from the end. Smifaye set a time of 1:35.467 but was quickly knocked down the order by both STR TommyB and Shouty once again. Shouty took a stunning pole position with a time of 1:35.016.

The race started under a bright blue sky with Shouty not getting away well, allowing TommyB through into first. Smifaye had a look down the inside but thought better of it. Mr Flobadob got his nose stuck in and took third from Smifaye which quickly turned into second after getting past Shouty at turn 3. There was chaos in the midfield with Butler258 in the heart of the action and drivers facing the wrong way, this left the front four to battle it out for themselves. Smifaye set about chasing down Mr Flobadob and got past on the second lap. On the next lap he was within a second of leader TommyB and was able to use DRS down the back straight which propelled him into first place. The next lap was extremely close between the two drivers with TommyB looking for a place to get past but foolishly made a move just before the DRS detection zone and DRS was once again given to Smifaye who used it to pull away down the back straight. TommyB then locked up in the braking zone at the end of the straight and bumped into Smifaye making himself spin and down to 4th position.

Slevmeister meanwhile had started on a contrary strategy to the rest of the field after having decided to not set a qualifying lap to save tyres for the race. This paid off big time after he made his way through to 1st position after Smifaye pitted from the lead. He retained his lead until he pitted later in the race. Shouty had dropped off his qualifying pace and was languishing in the midfield battling with Bookoi, and Butler258. The two Pudding GP drivers having their last battle as team mates.

At around lap 30 the light started to fade and on lap 43 the floodlights took over and the battle went into the night. By this time Smifaye had gained a comfortable lead to chasing driver TommyB and was on his last stint using the prime tyres. Smifaye managed to hold onto the 1st place after a worrying few laps towards the end of the race, including two spins and a rather worring moment when both Bookoi and Butler258 unlapped themselves down the back straight.

The race finished in pitch black after over an hour and a half of racing with Smifaye taking the Special Event victory for the Black Raptors team.