The series will consist of 16 races held across 8 event weeks, run across successive Thursdays from the 25th August to the 13th October 2011. RumblyLizard will start the season as championship favourite, as he defends the title he won in Really Rubbish Racing's first season of competition. He announced a team up with series newcomer Mr Flobadob after initial negotiations with Smifaye fell through. Mr Flobadob is relatively unknown in the Forza circles having only recently bought the game but the lineup of champion and rookie may prove to be one of the most exciting on the grid. The team name has been confirmed as RumbLee Racing, and will race a pair of 2003 SEAT Leon Cupra R's in a combination of turquoise, cream, and black, with sponsorship from craft beer brewery Brewdog.

So far six drivers have confirmed they will be running as team mates. Five-time season 1 winner Tomcheesey has announced he will team up with the Original Reserve, FlavouryRug in a team known as CheeseyRug Racing, who plan to run Honda cars. Season 1 pre-season favourite and Really Rubbish Racing founder Ajokay leaves his Ajokay Motorsport team to join forces with JemTech Racing's Bookoi. They have secured backing from Renault to run a pair of Megane RS250 cars under the POWA banner, using sponsorship money from intergalactic delivery giants Planet Express.

Series newcomer Mr E 004 becomes the first rookie to sign up for the second season, and will be looking to impress in his VW Scirocco GT alongside multiple season 1 race winner Sodamn Insane 6, entering in a team known as Shout-E-Motoring. GTTCC driver Dan Thorn has found the funding to acquire the Really Rubbish Racing "Xbox 360 Licence" needed to enter the series, with the view to race as a reserve later in the season. 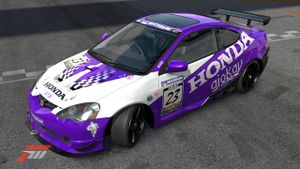 Cars must be 3, 4, or 5 door hatchback, saloon, or coupe body styles, be front engined and front-wheel-drive, and ideally have an engine with no more than 2000cc displacement. A couple of exceptions may be made, such as the Ford Focus ST and the Mazdaspeed 3, which have a slightly higher displacement. The Forza Motorsport Class and PI of the car must be B 500. Any driver or team found running a car with parts above and beyond the upgrades outlined below will be disqualified from any races the car has taken part in. Repeat offences may result in explusion from the championship.

All cars entered must have the following upgrads applied:

The above upgrades should go a long way to making the chosen car B 500. The following upgrades are optional, and can be applied to help the car reach the B 500 class and PI required:

If your car is still not B 500 class and PI after the above upgrades, then the following minor engine upgrades are permitted:

If the car ends up a couple of points over or under the B 500 limit, tweaks are permitted by using "Street" or "Sports" spec versions of the mandatory upgrades that only change the PI slightly, such as Driveline, Rim Style, Tyre Width, Rim Size, Differential, etc. However, "Street" or "Sports" parts cannot be used with the sole aim of lowering the PI enough to be able to squeeze more engine upgrade parts in. Engines are to be left as stock as possible.

Cars with original engine displacement of less than 2000cc may use the "Displacement" engine upgrade to raise the size closer to 2.0 litre. The addition of any kind of turbo is not permitted.

A calendar was announced on the 28th July 2011, consisting of 16 rounds across 8 events.

Championship points will be awarded to the first seven positions in all races for each of the two classes. This has been increased from the first 6 positions in season 1, which gives those in 7th and 8th place something to fight for. The points different between 1st and 2nd positions has been decreased to provide closer competition across the duration of the championship. Each class's race lobby has to feature at least 3 entrants to be considered a championship event and the drivers be eligible for points.