POWA is a team formed on July 19th 2011 by drivers Ajokay and Bookoi, with a view to compete in the second season of Really Rubbish Racing competition, the RRRTCC.

The team name is a mash-up of the founders' initials, PW and AO, rather than an acronym standing for anything in particular.

The idea of the team came about when Bookoi announced his intention to race a Honda car in the RRRTCC. With Ajokay also having planned to race a Honda, but not wanting there to unnecessarily be two teams with the same car when others were available to form a more varied grid, season 1 champion RumblyLizard suggested the two team up. Having initially planned to run a pair of Honda Integras under the portmanteau-ish name of Boojayboojayboo Team Honda, the pair decided that the Renault Megane RS250 would be a better and more original option, and a less childish name for the team was chosen.

The team finished overall 3rd in their inaugural season, equal on points with 2nd placed RumbLee Racing, but behind on race results countback, with 2 wins to RumbLee's 4.

Once on track, the team started the season fairly well with a podium in each of the first two races at Sunset Peninsula. Ajokay coming 3rd in the sprint race, and Bookoi taking advantage of an inspired pit strategy to bring his car home in 3rd in the feature race. Two more 3rd-in-class finishes were the reward for some solid driving in round 2 in Spain, although Ajokay was beaten to an overall podium in the feature race by hard charging Independent driver Smifaye. One of the team's best race days of the season came at the infamous Amalfi Street Circuit. After much testing and perfecting the setup of the Megane, Bookoi took 2nd place in the sprint race and scored both his, and POWA's, first win in the feature race, a feat which Bookoi himself described as "YYyyyyyeeeeeaaaaaaaaaahhhhhh!!!!"

The team fell back to earth at Laguna Seca, failing to reach the podium. A feat almost repeated at the Le Mans Bugatti circuit until Bookoi managed to snatch a 3rd place.

By far and away the team's best event came in front of a home crowd at Silverstone for the International Showdown. Both drivers fought off the challenge from FlavouryRug's CheeseyRug Racing Honda Civic to bring home a first ever class 1-2 for the team, although independent runner Dan 7horn stopped this from being an overall 1-2 due to his Vauxhall Astra VXR squeezing between the two Meganes in the final results. Ajokay followed up his win with a 2nd place in a controvertial feature race which saw him collide with Mr Flobadob whilst battling for the lead.

Unfortunately the Silverstone good form didn't translate over into the final 2 events, and with 3 4th places being the best the team could muster, POWA let 2nd place in the Team's Championship slip away to RumbLee Racing in the final round. The two teams were equal on points, but the black and blue SEATs took the 2nd place on results countback.

Ajokay finished the season 3rd in the Drivers' Championship, just 6 points ahead of Bookoi. A career best championship finish for both drivers.

Both drivers went their own seperate ways for season 3 of competition, the 4za Motorsport Championship, returning to their self-run teams for the 12 race series, but vowed to pair up again in the future with the aim of taking POWA to a championship title.

POWA have announced that they are to run a pair of Tesla Roadsers in the electric and hybrid vehicle endurance race, the Zer0EEE. Both drivers will compete directly against each other in the Tesla class. Having lost the title sponsorship from Planet Express that dictated their car's green colour during the RRRTCC, the event will see POWA debut their new colour scheme.

2 Days before the event, POWA premiered their new livery at a private event in the Bernese Alps, Switzerland. The car is predominantly black, with coloured areas of dayglow yellow and bright purple of Bookoi's and Ajokay's personal team liveries highlighting the lines of the cars. The colours are inverted on each car to help to tell the two drivers apart.

During the race itself, both cars got off to a fairly good start. Bookoi pitted early and at mid-distance to avoid lapping traffic, and spent the remainder of the race closing the gaps to those ahead, managing to avoid a lot of the traffic whilst other cars pitted. Ajokay waited until one-third of the distance for pit for the first time, and near the end of the race to pit for a second time from the lead, exiting onto the track just as Bookoi rounded the first corner. The team-mates fought for a couple of laps, but ultimately Ajokay had the upper hand, and stayed in front until the chequered flag dropped, with the two cars photo-finishing 3rd and 4th in class, half a second apart, and half a minute behind class winner RumblyLizard

POWA show off their two Mercedes-Benz AGM C-Class machines ahead of the first round of the HGTM.

The season started well for Bookoi. After an 11th place in the opening race, a string of good results punctuated by two podiums - a 3rd in round 2 at the Nurburgring and a 2nd in round 5 at Suzuka - saw him lying 3rd in the Drivers' Championship standings after 3 of the 10 double-header events. In contrast, Ajokay struggled in the first third of the season, finishing behind his team mate in 6 of the first 8 races. Fortunes switched at the 5th event of the season at Sebring, with Ajokay picking up his first podium of the season with a 3rd in the sprint race, followed by a strong 4th position in the feature, beating Bookoi in both races - a first for the season. After a short break for the mid-season Special Event at the Nordschleife where the drivers returned to their own independently run teams, Ajokay again placed ahead of Bookoi in both event 6 races at Indianapolis. Ajokay picked up a second podium finish with 3rd in the Mugello sprint race, and the pair alternated the better result for the next 4 races at Twin Ring Motegi and Infineon Raceway, with Ajokay picking up his 3rd and final podium of the season at the American circuit.

With Bookoi trailing Ajokay by 22 points heading into the final event at the Hockenheimring and lying 4th and 6th in the standings, the start-of-season form returned with Bookoi scoring a final podium in the sprint race and beating his team mate to the flag in the feature. Ajokay in return had a woeful event and notched up his worst combined event results of the season. Ajokay lost 4th place to a resurgent RumblyLizard, and Bookoi closed to within 12 points. The two drivers finished 5th and 6th in the end-of-season Drivers' Championship standings. Their joint effort secured 3rd place in the Teams' Championship for the second time, having narrowly lost 2nd place to RumbLee Racing in the RRRTCC 6 months earlier. They were the highest-placed team and drivers to not score a victory in the HGTM, and the only team to see both cars start and finish every race.

POWA ran one car in each class.

After much hype and speculation, it was announced that POWA would take over the assests of the Pudding GP Formula 1 team to form POWA GP, bringing on board driver Ajokay to partner Bookoi, already a veteran of the first two Really Rubbish Racing Formula 1 seasons. The newly-formed team will continue to use the MVR02 chassis raced by Pudding GP in the F1 Asian Series and the Sunset Grand Prix.

There was even talk of entering a single car (front-centre) in the 2013 Blancpain Endurance Series.

POWA defend their teams title in the SEAT Leon Supercup. 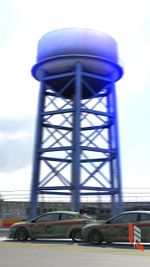