Shorter races, no GT3s. A few leaked tracks as well, with Watkins Glen, Jerez, Monza and Road America announced over time. And far more powerful than touring cars – so much for the clues shared pre-season. Time to announce it proper then, with the impending logo change teased earlier today maybe giving a slight final hint: Welcome to the 2019 Formula GEARS season! Oh yes, you read that right, we’ll go Open Wheel for the first time, beginning in February 2019 and concluding in December 2019, running 8 events in total.

For the first time ever, we’re going single-seater for GEARS, but which mod to go for?! There are so many! In the end, we decided to tone it down a bit instead of going for the full-on F1 option, making it all a bit more accessible for all members – and apart from that, having the vast playing field of GP2 engine jokes was too enticing, to be honest: We’ll be using a GP2-ish mod originally created by Formula Simracing for their 2016 campaign that we’ve supplied with a few adjustments, mainly to make pitstops (far) shorter and adjust a texture or two.
Not too much work to be done though, no changes needed for the mighty V8 and the chassis too is still very good looking for a 2016 spec. Thankfully, we won’t need to quite go down the rabbit hole that is the current F1 tyre selection: A few compounds remain though, so there should be plenty variety for various strategies!

As teased, we’re gonna go global yet again, zig-zagging across the planet: The season will kick off at Northamptonshire’s Silverstone before heading over the pond to take the action to the Road America circuit. After that, it’s back to Europe for the Spanish round at Jerez before we’ll pack everything up again and make way for Japan: Suzuka awaits! The second half of the season will be opened by Monza, soon to be followed by races at Watkins Glen and in the Dutch dunes of Zandvoort. Come December 2019, everything will conclude in the Ardennes mountains: Finale at Spa!

The season will consist of 8 rounds running on Sunday evenings, beginning on 3rd February 2019 and ending on 15th December 2019. It will feature 305km races with live weather conditions. With races that long, they’ll likely start a bit earlier than usual (but maybe not as early as previous GEARS campaigns) – and for the first time ever, we’ll see standing starts in GEARS!
Apart from that, at least one stop for fuel and tyres will need to be made. This means you will have to be 100% sure of how the pit menu and selection works, so please make sure you do. Practice this in tests. You only have yourself to blame if it goes wrong during the race proper. You can create preset pit stop plans regarding refueling, though the tyre and damage adjustments have to be made mid-race using the HUD.

Before pitting however, there’s need to qualify – which will happen in 30 minute qualifying sessions, and to spice things up a bit, there’s no room for banter setups here, unless you feel like running them for 90-ish minutes, as well: After qualifying, it’s going to be parc fermé until the red lights go out for the race start!

Yet again, there will be a teams’ championship, along with the obligatory driver’s title! Points will be awarded down to 8th position.

Liveries will be mandatory – templates are available on the FTP now. As always, sections not to be changed are marked as such.

Sponsorships are preferred to be unique or appropriate to you, as if you had sought the sponsorship for yourself. Tobacco and firearm sponsorship is prohibited, and liveries are to contain nothing illegal, immoral or offensive (which we will have final say on).

Drivers running as a two-car team do not have to run the same livery, though it would be appreciated to see similar design choices as per the real world (changing sponsors, maybe some colour panels changing etc.). Team mates running the same livery must contain elements that allow them to be distinguished from one another. 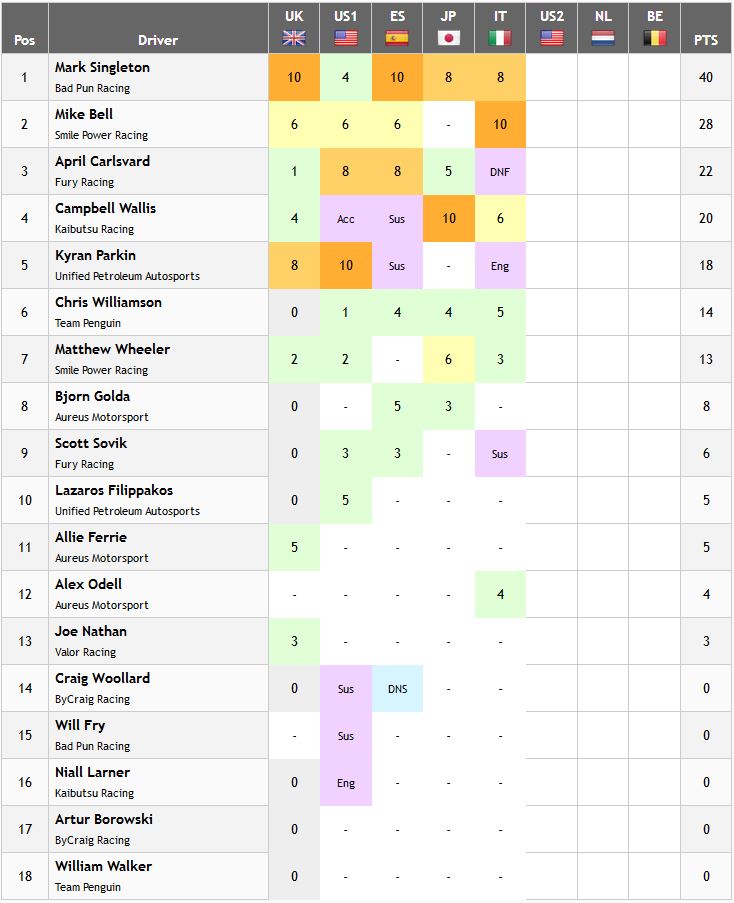 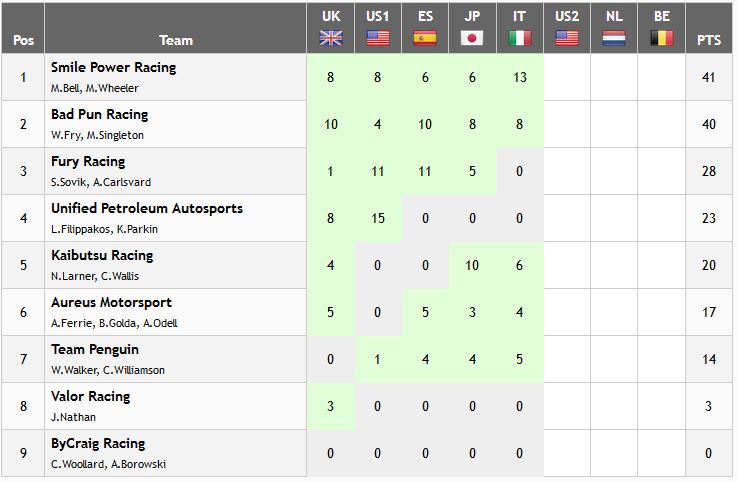