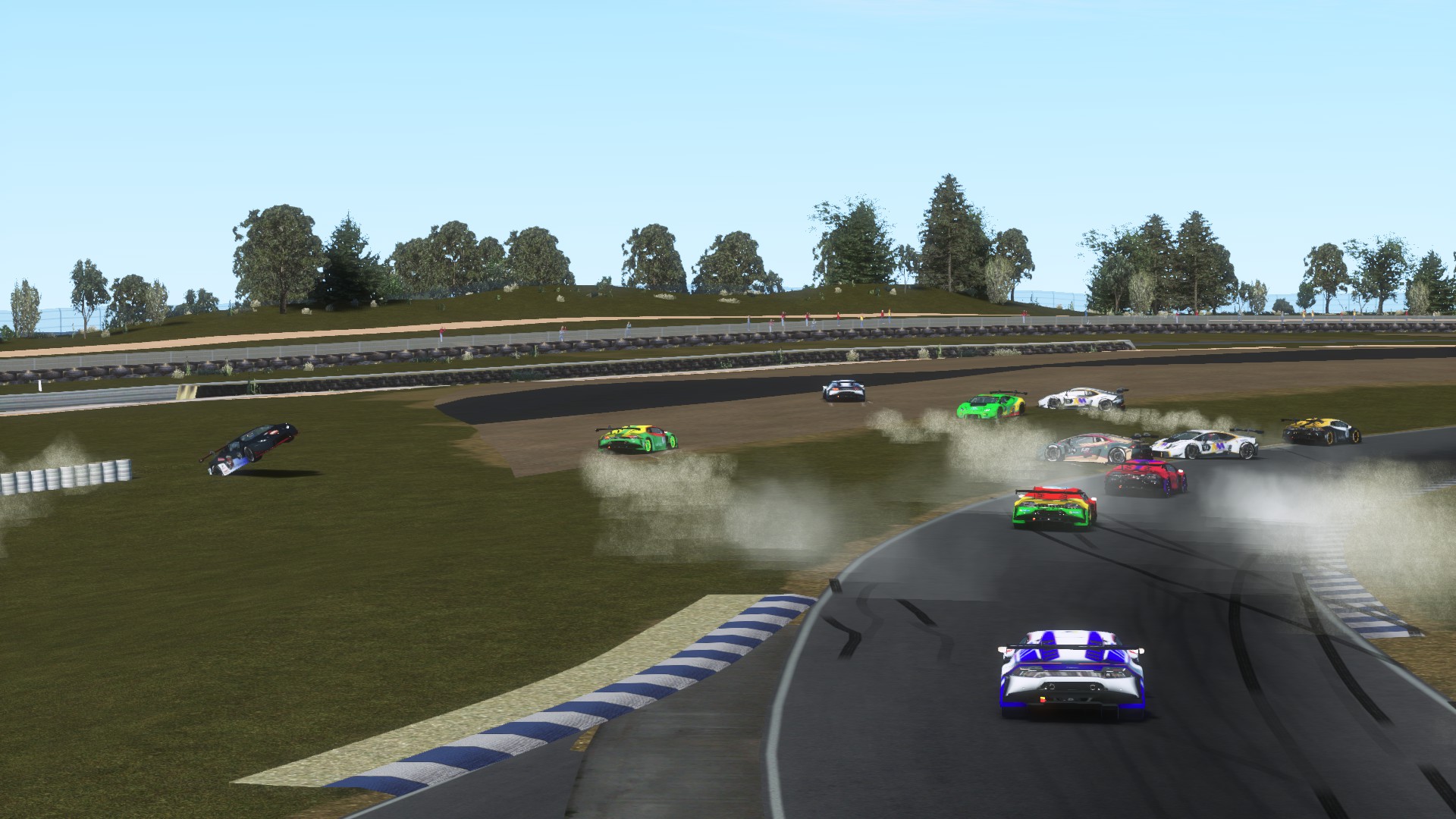 Scott Sovik took advantage of two chaotic races to extend his lead in the CLASH championship at Philip Island.

It was a front row lockout for the top two in the championship in qualifying, with Sovik being the only driver to break the 1:26 barrier. Kyran Parkin lined up alongisde after beating team mate Lazaros Filippakos, making his first start this season, by only 0.056 seconds.

At the start, the top five got away cleanly but there was carnage behind. Mike Bell moved out of Allie Ferrie’s slipstream on the run to the first corner, unknowingly squeezing Bjorn Golda into Rob Covey, with the crash and resulting concertina collecting seven cars in the midfield. Amazingly, while most of the cars sustained damage, only the unfortunate Covey was forced to pit for repairs after unfortunately smacking a wall before retiring with the damage on lap seventeen. The big winner from the melee was Alex Odell, starting 12th, who avoided the carnage and would eventually finish a strong 4th.

Up front, Sovik had dropped to 3rd off the start, behind the two UPA cars. The top three were starting to pull away when, on lap seven, Sovik and Filippakos had minor contact in turn 2, Filippakos spun, and Mark Singleton was unable to avoid the stricken car. The accident caused major damage to both cars and they would finish well outside the points after lengthy repairs. Campbell Wallis benefitted, inheriting a lonely 3rd to take his third podium of the season.

Sovik and Parkin remained locked in combat, with neither driver able to build any significant lead. Sovik re-took the lead on lap nineteen, only to lose it again five laps later, and it was Kyran Parkin who took his third win of the season by only 0.8 seconds.

Bell was top of the survivors of the turn 1 pile up in 5th, only missing out on beating Odell after tangling with a backmarker late in the race, while April Carlsvard beat Matthew Wheeler and Ferrie to round out the points, James Lambert being unlucky to miss out. Bjorn Golda, another victim of turn 1, was the last car on the lead lap in 10th. 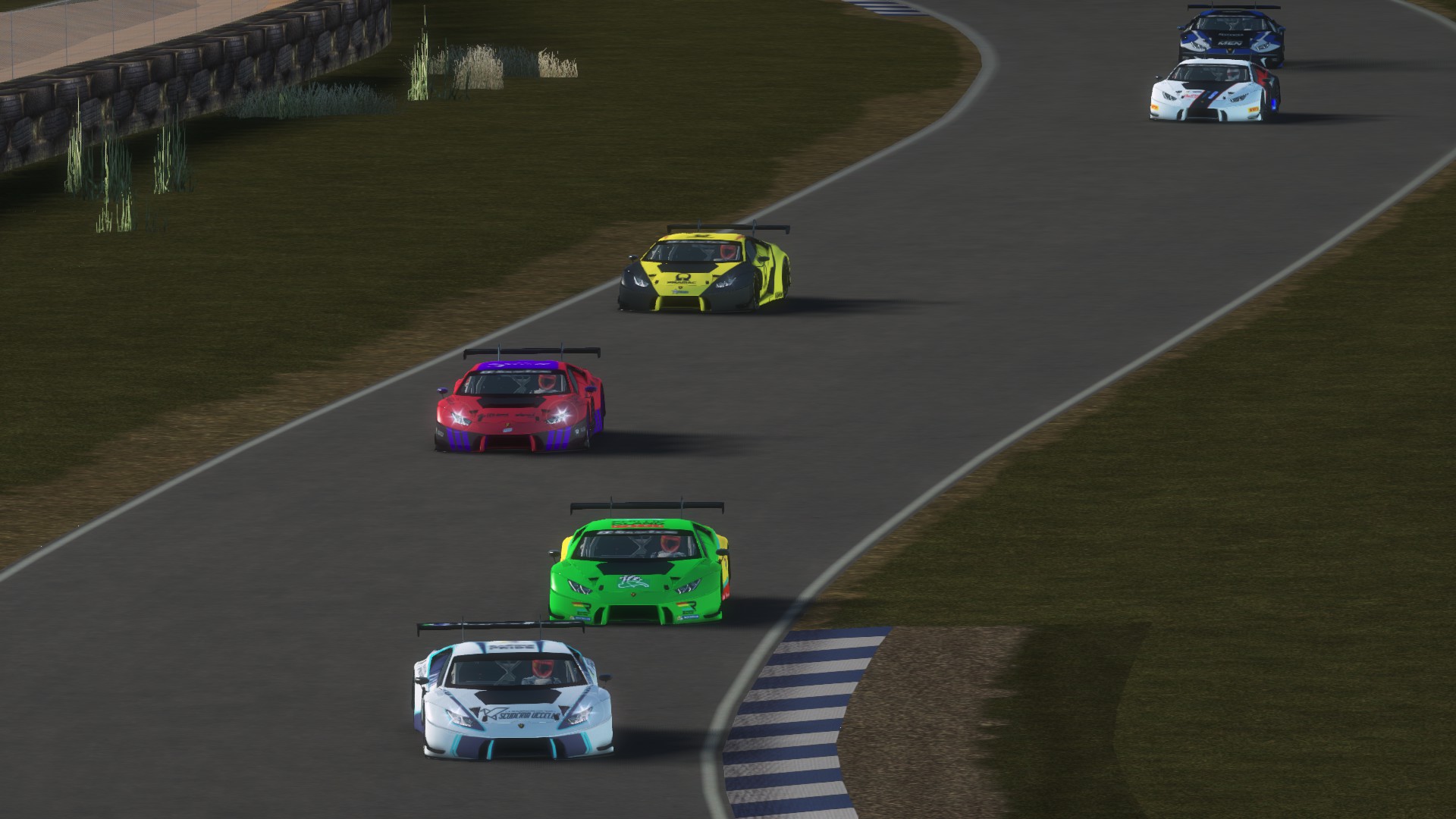 Kyran Parkin would experience the highs and lows of simracing in one night, though. From 8th on the reverse grid in race 2, he got caught up in the midfield tangle in the opening corners then, at the end of the first lap, he ran wide at the final corner and encountered a spun Bjorn Golda in the gravel; the subsequent hefty collison put both cars out on the spot. Meanwhile, Will Fry suffered a DNS due to computer problems and April Carlsvard was another driver who only survived the first lap due to damage from a collision.

At the front, Allie Ferrie was capitalising on her reverse grid pole and had built up a small cushion ahead of the pack but Scott Sovik, having passed Matthew Wheeler on lap 6, was in hot pursuit. Despite Sovik catching at a fast rate, Ferrie would probably have been safe but for a small error on the last lap which gifted Sovik a third win of the season to Sovik.

Wheeler successfully fended off Lazoros Filippakos for several laps to claim his first podium of the season in 3rd. Filippakos, though, was another to slip up on the final lap and lost 4th to Campbell Wallis. Rob Covey scored his first points of the season for 7th, with Mike Bell in 6th and Mark Singleton in 8th rounding out a disappointing event for two drivers who would normally expect to challenge closer to the front. Chris Williamson and Ryan Eastham were the only other drivers to finish after Alex Odell crashed out of 9th on the final lap.

Kyran Parkin (#1 UPA): “Race one was the perfect mix of car conservation, consistency and all-out aggression. Thanks for that one Scott! Race two was uh…no. Sorry Bjorn!”

Scott Sovik (#58 Fury Racing): “[Race 1:] Had a mad fight for the lead with Kyran, very enjoyable but annoyed I couldn’t get the win in the end. [Race 2:] Managed to get a clean start, managed to pass Alex and Matthew before chasing for the lead, only for Allie to go wide on the last lap. Got the win in the end, but Allie really deserved that win so commiserations to her, that was really unlucky.”

Allie Ferrie (#35 Scuderia Uccello): “From maybe the hardest point I’ve ever scored to wobbling off on the final lap and losing a fairly safe win, a morning of mixed emotions.”