After a successful run out, it's time to leave the Land of the Rising Sun and head south to the hot and sweaty climes of Malaysia as CLASH visits Sepang on Sunday, 15th September 2019! 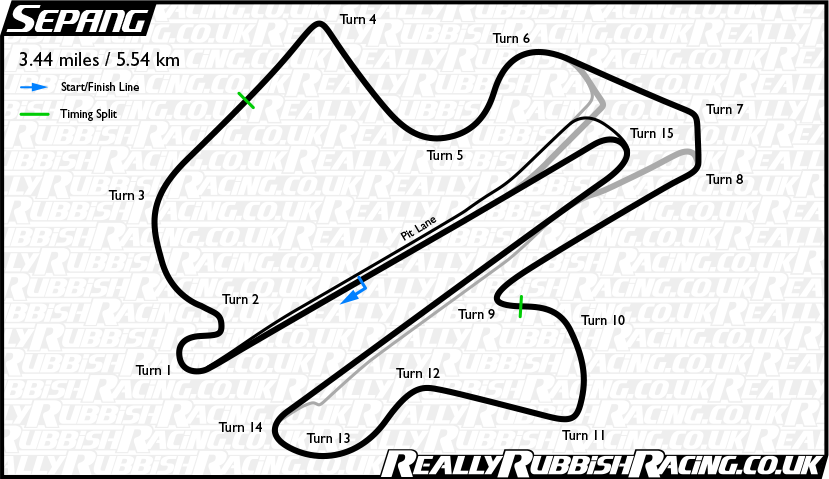 Please post below whether you are planning to race

Pit Entry: Straight on at the exit of the final corner. Please announce pit entry if you're close to other cars.
Pit Exit: On the right on the main straight. Respect the blend line.

Track Notes
The first corner is a bit tricky as you go from a very wide entry to quite a tight turn 2. Beware of other cars around you.

Keep two wheels within the track limits at all times.

Event Notes
These cars do not tolerate contact at all well and even a slight touch will cause damage. As such, we will take a hard line on avoidable contact where we find it/where it's reported.

We will review lap 1 of both races as well as any incident reports. Please report incidents to @Lin1876 or @lemming77 on this forum or Discord by 19:00 UK time on Tuesday, 17th September 2019.
1x
"He's rolled the car at Dunlop. How has he managed that? I'm genuinely impressed."

I miss Autopolis, but am good to race this crap? damnnit

I should be there

Most likely for race 2. Don't know about race 1 at this stage
0x

May be late, but in for sure

I'm gonna cough and sneeze a lot, but I will be here
0x

Quali: Some way off the pace, could've been worse in P13.

Race 1: Some good scraps and some nice battles, namely with @TheGwiiBird on the opening lap and @CuruxaUK in the closing laps. P11.

Not my best night. In race 1 I had a horrendous first two corners then compounded that with no fewer than four off-track excursions during the race. Eventually I stopped the rot and salvaged 7th. In race 2 I think I was unlucky to come out worst at turn 1 when three into one didn't go but that happens sometimes. I made decent progress after that and might have overtaken @MrRandom287 at the final corner but it all got a bit close and @CuruxaUK took advantage to drop me to 6th.
1x
"He's rolled the car at Dunlop. How has he managed that? I'm genuinely impressed."

8th in Q lead to an exciting first few laps until Allie spun, giving me 6th, then Mark and Art just paced me out at the end, P6.

3rd on the grid and lead into T1 and just held it down despite a half-spin, first win with my new number making it 3 wins out of my last 4 starts

Mike Bell wrote:
8th in Q lead to an exciting first few laps until Allie spun, giving me 6th, then Mark and Art just paced me out at the end, P6.

Quali: I qualified 17/18 and even though I'm at the back of the field again, I was also quite pleased. I managed to break into a 2:02 for my qualifying lap leaving me only a second off the mid-field pace. A slight improvement on last week.

Race 1: I never thought I'd be so happy to finish 15th

, however I managed to keep it on the track for nearly 40 minutes. A really solid steady race saw me pick up 2 places. I was actually in 14th and had my first spin with 2 laps to go, after a mostly lonely race the pressure of someone behind me caused me to push on a little bit too much on worn tyres. I also didn't get lapped, which was a nice achievement for me

Race 2: After a hectic first few corners I managed to come out quite clean and found myself in 10th at one point. However I think I need some practice at racing with people on my tail as I made a lot more mistakes until I dropped back to 14th. A steady cruise round from there to keep hold and not get lapped again

. Hopefully I can pick up a little more pace next weekend and be closer to the pack.
3x

Q: Nailed a lap at the death to take pole and this time it didn't get stolen from me like in Pacific GT earlier that afternoon! P1

R1: Basically drove at 90% to conserve the tyres, keeping smart with my lines and allowing little to no opportunity for @fjordnet to pass. When the opportunities did appear, it either resulted in him going too deep into a corner or simply getting muscled off the superior line. I expected this to be the case for the full 40 minutes but he spun off at T11 with 6(?) laps to go, allowing me to cruise to the finish. P1

R2: Went from 8th to 3rd again, before turn 3 again. Bounced off a Fury in all of the T1/2 chaos trying to avoid everything. Had to fight @MrRandom287 very hard for the second week straight, this time over P2 and after I cleared him I was about 6 seconds off the lead with a very fast @lemming77 tagging along as we cut the gap down. A little bit of bump and grind as we raced each other about as hard as we normally do which ended in a missed braking point at T4, a big bruise on my Huracan's butt and a bit of sideways lawnmower action. I tried to catch @Mike Bell again afterwards but ran out of time. Oh, in addition to touching me inappropriately April also stole the FL! >:c P2

Quali went eh, okay with P7. The race one start however amended that quickly and I found myself as high as P4 come the end of sector one. Whilst I couldn't quite match the frontrunners' pace, they didn't just accelerate into the sunset and out of sight either. Given that I was worried about racing rustiness, seeing some good pace is definitely a positive sign. Ultimately held onto a P5 finish, which I'm really happy about

Race two effectively ended at turn one - got sandwiched between two other cars while trying to avoid the accidents, and then hit another one stopped perpendicular to the track. With plenty of damage on all sides of the car I didn't want to risk running in this state, so in the pits we go. Lost 30 seconds by not un-checking a tyre change but that ultimately made no difference points-wise, finishing a lap down as the last man on track. Shame, shame, but that's how it goes - this time there's plenty of positives to take away, fortunately. Bring on Zhejang Zhejiang Zehjiang that new weird track!
0x

So everybody is aware, we're going to run this race on build v1112. Build v1115 has reports of stability issues, namely more frequent screen freezes. Although these haven't affected us seriously yet, we'd like to play it safe and do something before it becomes a problem. Especially with our grid sizes on the rise. So we will be rolling back the server to stay on the safe side. Setups and practice won't be affected, so all you have to do differently is roll back. Check this picture for a handy guide on how to roll back to v1112! It is listed as a beta under rFactor 2's properties in Steam.

If this setting is greyed out, make sure you have the rF2 launcher closed!

Drivers Involved: @craighypheno (#86), @Shinobi (#74)
Event/Race: S29 - Sepang Race 1
Timestamp: 1872
Short Description: Martin stops right on the acceleration zone coming out of T9 during the lapping and I ram him. Both cars damaged
Verdict: WARNING for Martin Fernandez
Comment: We believe this incident was caused by Martin slowing on the racing line. If you want to let people past, it is safer to move off the racing line before lifting. Other drivers will generally expect drivers on the racing line to be going at full speed.

Drivers Involved: @Lemming77 (#314), @Mosaegir (#35)
Event/Race: S29 - Sepang Race 2
Timestamp: 438
Short Description: Allie runs into the back of April during the final turn
Verdict: WARNING for Allie Ferrie
Comment: Allie braked far too late for this corner and that lead to contact with April. Please be more careful with long braking zones like this one.

Drivers Involved: @Lin1876 (#64), @MrRandom287 (#31)
Event/Race: S29 - Sepang Race 2
Timestamp: 1531
Short Description: Between Campbell and Matt. "He moved across on me under braking for the final corner and cost me a place to Niall. I'm not mad about it but I don't think that should happen without it at least being looked at in case anyone gets the wrong idea"
Verdict: WARNING for Matt Wheeler
Comment: We felt that Matt had a change of direction after his braking point, which drifted him towards the left and closed the space on his left. Campbell was already alongside at the braking point and so had committed to braking in this spot. This forced Campbell onto the grass, which is not fair racing.

Unhappy with this verdict? You may appeal the decision by contacting the admin team: PM Alex | PM Björn
0x
"April... You absolute bitch" - Neil 15/09/2017
Post Reply
32 posts
Jump to